February 17, 2020
It was the Kiawah Marathon. Mile 22. Everything hurt. My stomach was in shreds. It took all my focus to take the next step. Move. That was all there was left to do. There was no crowd. It was silent and still and cold. There were no women anywhere near me. There were several men running the same pace through the empty streets. We were plodding. It was silent. We were in pain. I had an idea. They might be interested to know -- this feels like labor! So, the very one sided conversation began..."He guys, if you were ever wondering what labor feels like, this is it!!" For some reason, I was sure they would say, "No way. Tell me more." They didn't. So, I just shared a little bit about the pain that we were all sure to be experiencing at this point in the race. Now they could tell people they understood labor! I don't think that was important to them at mile 22.  It was my first marathon after birthing two children and comparing the two, was of course, a great way to pass mile 22. These men had no interest in discussing labor pains.

Labor pains. Kiawah is in December. In May of that year, we miscarried at 18 weeks. At 18 weeks we went in for a check up. Things had not felt exactly right, but even after phone calls with the doctor, everyone decided I was just tired and dealing with morning sickness... However, at the check up, there wasn't a heart beat. And the ultra sound showed a mass that wasn't right. It was a molar pregnancy. A pregnancy when the body makes tons of cells, but the wrong cells. But I had a baby and wrong cells. Wrong cells are a lot like cancer. So, to be told that your baby will not make it and that you have cancer all in one sentence strikes unexpected and unrelenting and unraveled we became.

New realities set in. We were suddenly grieving the loss of a child and looking at the possibility of chemo treatments. Thankfully, the wrong cells were successfully removed during surgery and all of the levels that are supposed to be level were. But there was an emptiness. We were grieving for our lost child and longing to try again. The doctors said, "Whatever you do, don't get pregnant for at least a year. A year! I wanted to get pregnant immediately!

Kiawah meant closing in on the end of the wait. Kiawah meant we were making it. Kiawah meant one step closer to a baby. Those last four miles would lead to the final four months of waiting. And that spring, I was pregnant with our William. 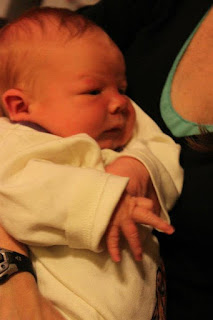 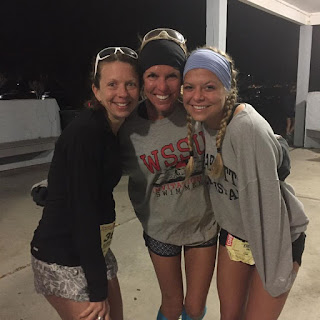 At mile 13.5, I fell into step with a girl. And that girl was weaning her first baby. By mile 22, we were telling our labor stories. We explained contractions and complications and pain and the sheer ecstasy at the sound of a crying child that signals the end of labor. Step by step, minute by minute, pushing ourselves to mile 23, 24, and 25 we never stopped talking about labor.  Strangers, yet runners/weaning mothers, together pushing each other faster and better than we ever thought possible. Strangers aware that this was like labor. We crossed the line and I turned to cheer my sister and my niece across that line in pouring rain.

And for you too. Whatever hard thing you have to do. Whatever difficult circumstance you face. That is your labor. Don't give up. Breathe through the contractions, the moments that make you cringe.  Push through the pain - because on the other side, there is beauty. There is hope. There is accomplishment. The pain in the process is taking us all to accomplishments great and small.  This life is hard. It isn't easy, but there are glories all around us. Look and find them and press on! "This is what labor feels like!"