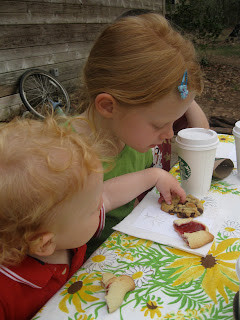 Amelia wanted to have a coffee shop party for her friends to celebrate her birthday. We planned it all week. We named the coffee shop, "Amaruma Coffee." George Wilder says it means, "Good Coffee". We made the logo. Of course it included a tree (Amelia draws trees constantly) and coffee beans. We made decisions about what to serve and how to serve it. 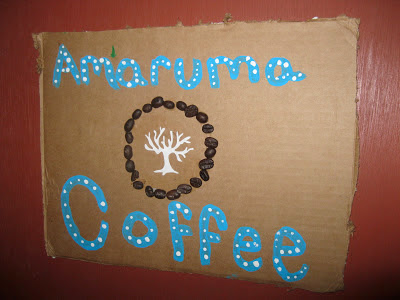 Then Amelia decided to make a castle. She found some bricks in the yard and started making a wall/castle. George Wilder was responsible for making the mortar from ash and water and dirt. They worked on the wall/castle for days. The coffee shop became the side show and the castle would be the center of play. They walked through exactly how the day would go all afternoon Thursday. It was nearly impossible to do any school work Friday. They looked longingly toward the castle/wall. There was work to do. It had to be finished and decorated and set up for extensive castle visiting. There were problems to be solved, stories to create, rolls to pass out.

Amelia woke up before I could tie my running shoes. She was ready at 7:00. They were arrive at 4:00 p.m.. They worked some more on the castle/wall and made some lovely mud ball toys and decorated with flower petals. By lunchtime I asked them to clean up and change clothes. They were covered in mud and ash.

We made cookies and waited some more. Finally, playmates arrived. I had warned the children with as much enthusiasm as possible that they had a lovely set up but that it might not be what everyone would love to do. They were certain this would not be the case but I let them know I would be happy to help with play if anyone (as crazy as it may seem to them) didn't want to play in the mud/ash wall/castle house. Did I mention, Amelia built it in the one part of the yard George hasn't cleared and the area had several briars hanging about....

The castle/wall didn't really come together. I stayed close and quickly offered assistance. They had decided perhaps they would like to run some races so I gave them all a number on their hands and said, "Hello everyone, it is race time. Isn't it lovely weather to race! After race time, we will visit the local art gallery for an art class before heading to the coffee shop for coffee." We ran races and cheered on numbers, 128, 1000, 12, 7, and 100. They ran round and round. Friend Ben thought we should have a slower race, so I suggested they all race as an animal. Amelia decided to be an armadillo (?), George Wilder a rabbit, friend Leora a dolphin, and Clare a chetah. After the races, I set up art time and all quieted down. 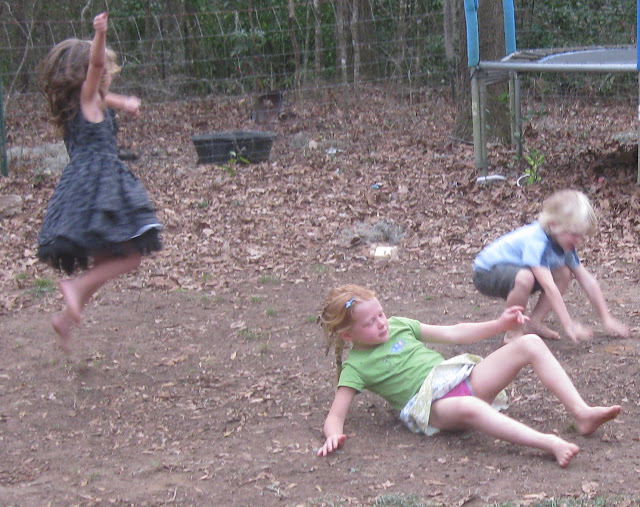 George Wilder help serve hot chocolate and cookies at the coffee shop after art, but they didn't really play coffee shop or wall/castle. 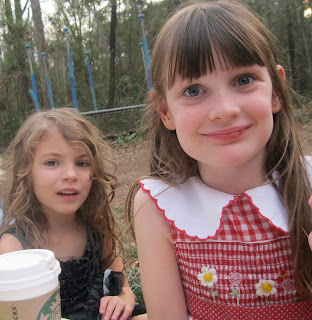 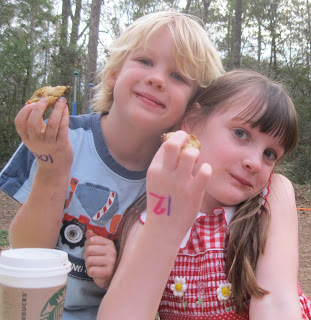 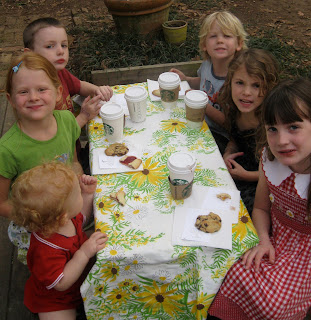 They did run races and take off on an adventure in the woods. Not two minutes into their adventure, they spotted an enormous owl in the tree. Amelia was beside herself with excitement. Then the gate was left open and the sheep got out, but Daddy retrieved them quickly.

Children are fascinating. Amelia had the most glorious time. All the children just played around and together and alone and beside. Their play is a dance in and out of each other's lives. They are ecstatic to be together and terrible at working through it and perfect at bubbling along just overlapping and arguing through moments of fun. 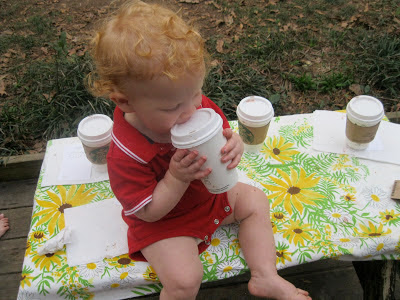 Crashing into bed with great big smiles, all three children floated away into sleepy land on cloud nine filled up with child's play.