July 13, 2019
Summer time is hay time. Fields and fields of hay cover the country side — anytime we have left grandmother's to go anywhere— we have watched tractors cutting, fluffing, raking, baling, and collecting. It almost looks fun! And right here, in grandmother’s back yard, there was plenty of hay — as high as our chins — that needing cutting and fluffing and raking and baling. 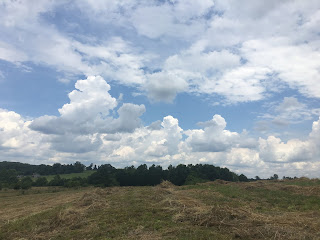 I stayed on kitchen and laundry duty in the cool while George and willing children worked on the hay. Out there on the tractor, there is a lot of room to think and imagine. And the hay is right there looking available. Hay is definitely food for animals, but it has a few other uses too. I’ve certainly sat on one used as furniture at a wedding. I have picked pumpkins at the pumpkin patch off of hay bales, and I’ve been on hay rides…

George has grand ideas for all things, even the lowly hay. He and the children gathered the bales that a friendly neighbor happily helped us bale, and set to building. Two days later, they had built a little straw bale house with a reed roof from the reeds they collected by the pond.

George Wilder was in charge of building the roof frame, which they built from scraps of lumber in the barn.

While George Wilder built the frame, Amelia collected bundles of reeds called shocks from the pond. The shocks became the layered thatching. 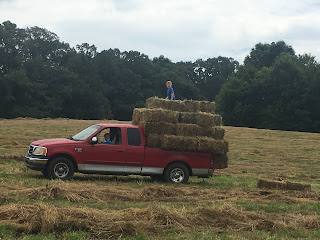 William helped cut reeds, helped keep track of the string to bind the shocks, helped straighten the bales and helped balance the roof with lots of roof sitting. Roof sitting is a thing.

When it was time to move the roof from the construction site to it's new home, the thatching grew heavy causing the roof to tilt, therefore it became a job to stand on the other side to balance the structure during the move.

The little house is perfect for play and to admire. George shared images of beautiful homes built with straw bale construction and there is a book floating around describing how to build with straw bales...This is only the beginning. 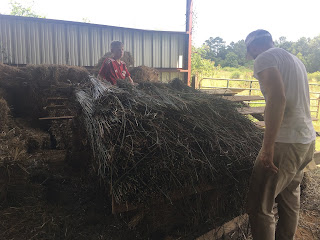 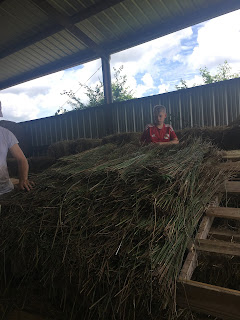 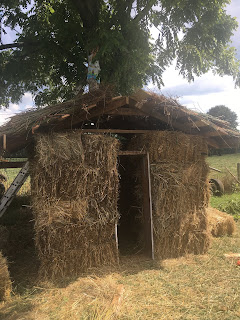 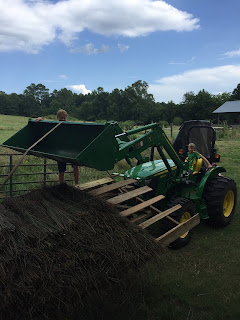 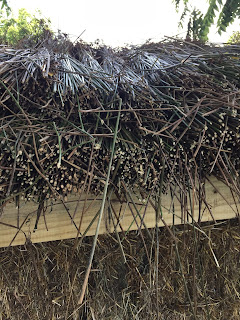