Veterinary 101: Emergency Surgery On A Cow and Tending Baby Piglets

January 07, 2019
We’ve been farming for a decade. It is hard to believe. We bought Amelia her first chicks when she was two and we have never turned back. We attempted to raise sheep and decided against that. We even thought we would raise rabbits, but that project wasn’t one that went well. We have thoroughly enjoyed raising chickens and pigs; and this year, we added three cows to the menagerie.

Because the animals are living creatures, we walk closely and often to the experiences associated with animals living and dying. We’ve lost an  entire flock of baby chicks in one fell swoop to an extremely greedy, hungry raccoon. We’ve lost eggs to snakes, we lost a sick sheep, and we say good bye regularly to our healthy pigs when they are sold and sent to the butcher. No matter what, we love them deeply.

We are beside ourselves with excitement when new babies arrive and beside ourselves sad when we lose them. Even the pigs that we sell we love and know. One of the kids favorite things to do is name their animals. They have wild names. We’ve had pigs with names like Bronte, Dread Scott, Homer Plessy, Appalachian and Superior. We’ve had chickens named Convoy, Pistol, Mary Poppins, Tess, and most recently, when chicks hatched right after the hurricane, they wanted to name the feistiest one after the hurricane, but Michael seemed too plain, so they named it “Leahcim”…

The last few months have stretched us and taught us and moved us as a farming family. It is humbling and exciting to share the journey.

We lost a cow. It was right before Christmas. Cows have sensitive stomachs and their typical grass diet changed with the season and the lack of grass. The problem was a combination of heavy rain and living in a city without great access to hay and too much corn and too much rich turnip leaves. We didn’t catch it in time and we woke up to discover that Bandit, William's cow, had not survived the night. It was crushing. We were so sad and shocked. We quickly learned how to deal with bloat and got straight to work helping the other two cows return to a healthy diet.

George says good farmers have to always be watching. We have turned into farmer hawks.

As we approached the new year, we knew JP, our mama pig, would have babies soon (we artificially inseminated her in September-our first try!) We watched and watched and watched. Finally, on January fifth, she started making her nest and grunting and chomping and looking terribly uncomfortable. There is not much to do but watch and wait. At 4:30 in the morning, I checked on her. Little squirmy babies were sweetly sucking away. We were elated! What joy. But, as the day went on, we noticed that there were several babies that did not make it. Four lived. Four died. I really struggled as I went to bed last night. How can we keep that from happening? We don’t know the answer. We don’t know why. They were perfectly, fully formed. I actually thought to myself, “Maybe I should go to vet school. Maybe I really need to understand these animals so I can know why and how and help if at all!”

This morning, the four little pigs are just as playful and sweet as can be and are such a joy to watch. 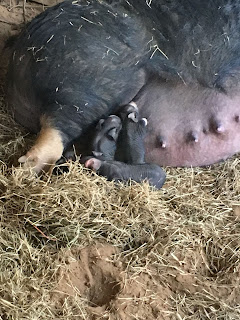 In the meantime, we moved the cows to the turnip patch. Mustafa, George Wilder’s cow, has slowly been recovering from the bloat incident. We didn’t realize he was still too sensitive to turnips greens and new rye grass. Near noon, sweet Hannah came dashing towards the house. “Mustafa is sick!” Amelia ran out to see him down and not well. She ran to me with terror in her eyes. George was at work. We knew we had less that twenty minutes to help him.

I called George. There wasn’t time for him to get home. He asked me to calm down and find a sharp knife. Mustafa was hardly breathing and his stomach was swollen like a giant balloon. George said I needed to create an incision in his side to relieve the pressure and let out the gas. There was no way ever ever I could do this, but I knew that it wouldn’t kill the cow, but if I didn’t do it, the cow would die. I got down on my hands and knees with the knife. Giant tears were running down my checks and we are all crying, “Help us Jesus!” I inserted the knife into Mustafa’s side. I was too nervous and pulled it out. I knew it wasn’t enough. I did it again with George giving me exactly details over the phone. Within thirty seconds Mustafa was on his feet and breathing! It worked. I couldn’t believe it. George was home ten minutes later and we dressed the wound and talked to the vet. The vet said that we did everything right. George is amazing. How did he even know? He said, “Common sense is find the pressure and relieve it.” 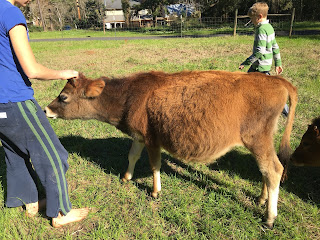 Mustafa is back on a very strict diet and seems to be doing fine. He is in the barn with his hay and the baby pigs are right next door frolicking around as silly as can be.

And I am so so thankful for the trip Hannah took on her bike down the driveway where she spotted the sick cow and I’m thankful George answered his phone and knew what to do, and that he believed in me and knew I could perform emergency surgery in the middle of the pasture. And I am glad for our sweet mama pig nursing four adorable piglets.