November 02, 2018
Amelia has a strong sense that if we have animals, they should be producing more animals.. She watches and wishes for her hens to go broody -- but they rarely do. She doesn’t ask for much, but she mentioned the word "incubator" on a regular basis.

And she is faithful to keep a calendar and watch our giant pig, JP, to keep track of her heat. But, we don’t have a male pig and we don’t have a hen that will brood or an adult rooster.

As the summer months were ending and school was beginning, we decided it was time to take action. Amelia informed me that it was time.  JP would be in heat in the next few days. Action was required and right now.

I called our friend Jim Elliot. We acquired JP from Jim and he used artificial insemination to produce piglets from giant JP, so he had wonderful advice on how to order semen from Bill in Iowa and how to make sure she was in heat. She’ll be grunting and make sure she is “standing”. “You won’t be able to push her over with a bulldozer if she’s ready,” says Jim. This was all new to me — a strange new world and new terms and phrases.

My next phone call, of course, was to Bill in Iowa. We had a lovely conversation about the type of pigs we were thinking about producing and lots of other important details. There is equipment, you know, that you need. Amelia listened intently, determined to walk through this process and succeed. We placed our order for pig semen just like we were ordering a new blender, which would come to us via next day airmail. 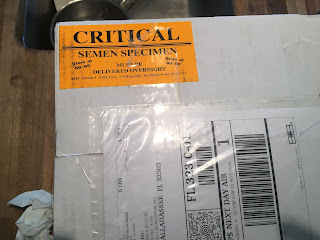 The next day, there was a knock at the front door. Unusual for the middle of the day, I opened it just a crack, showing great caution. There stood a man dressed head to toe in brown with a small brown box held out to me. All the information one would need to know concerning the contents were blazed across the box on a bright orange sticker. “It’s for a pig!” I explained.

Now it was a waiting game. Amelia carefully kept the package at the proper temperature and carefully watched JP. The next morning, the kids came running, “She’s grunting!!!” The sure sign she is in heat. We called Jim Elliot right away and asked if he would be willing to come help us in exchange for a spaghetti dinner. He and his sweet wife, Joan kindly drove over an hour to join us for dinner and help us with our first attempt to artificially inseminate our pig.

Of course, we had giant rains all afternoon and JP’s pasture was a mud pit. We all trudged out and sloshed out to JP with our supplies ready. JP looked concerned, confused, and cornered. She wasn’t standing. She wasn’t really grunting much now. Bill from Iowa sent a “stink rag” covered in the boar’s scent. He says this is sure to help. She sure liked the smell, but he must have not been on his smelling a-game at the time of smell collection, so it wasn’t very successful at keeping her interest.

We sent Jim and Joan home without success. The kids set alarms at bedtime so they would be awake and ready. They were not giving up. When I came up the driveway from my run, they were ready and waiting with supplies in hand. Once again we chased JP in vain. Maybe we were wrong. Maybe she wasn’t in heat. I let up a prayer, “Please Lord. First this is $138 dollars worth of critical specimens, and I have a bunch of hopeful children who I certainly don’t want to disappoint, so please, do you mind standing this pig?”

And with that, a neighbor’s silly dog came dashing up the driveway. Amelia ran to meet him and hopefully make sure all was well as the owner of the silly dog came sprinting along.

This left George Wilder and I alone with JP. And with the quiet, without a crowd of small children and people, she stood!

Fumbling with tubes and lubes and other such devices, we did what we had been told. We’d watched videos. We’d conversed. We’d prepared as best you can, but if you’ve not artificially inseminated a pig, you just don’t know.

You get three tries. Three tubes to work towards success. Twice more, Amelia and George Wilder tried and twice they succeeded. They were absolutely overjoyed. But then, there is the wait. We waited an entire month to see if it took. Such patience required of the children and all of us! We watched closely to see if she was back in heat and she was NOT! It appears that JP is going to be a mama! 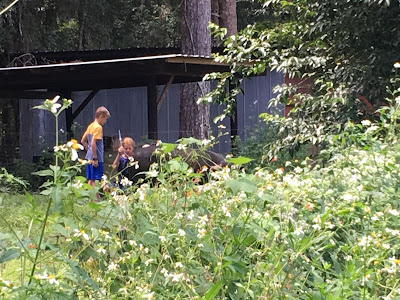 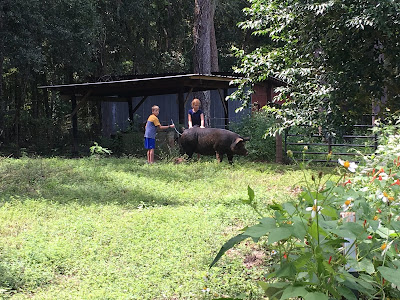 And without skipping a beat, Amelia was once again researching incubators. Finally, we made an agreement to get a well built incubator, but Amelia would pay half. She was fine with that. We were spoiled with the overnight pig insemination kit. Waiting a full week for the incubator was a lot of waiting! But, we had a problem — no adult rooster. I made a few inquiries on craigslist but it wasn’t really what we were looking for. I decided to call my friend Tara Blessing to see if she had a “spare” rooster.

She couldn’t believe I’d called. She had a rooster she needed to get rid of immediately — and she had extra fertilized eggs! The next day, we had eggs in the incubator. It is work to keep up with an incubator. It takes water. Did you know an incubator has to remain at a constant humidity level between 57-61? We add water to keep it there. Amelia watched her calendar until eight days had passed. On day eight, she “candled” them to check if little heartbeats were pumping inside the tightly closed shell. All of the eggs pumped away.

We were closing in on hatching day when hurricane Michael blew our way. We lost power it 3:30 in the afternoon and by the next morning, we realized that although we do have a generator, it would be too much to leave the generator running 24/7 just for the eggs. George did a little hunting around and found someone with a constant running generator. It was a hard decision to load the chicks up and send them across town, but we didn’t have much choice. Once again, I found myself praying, “God, please let some of these chicks hatch. Just a few will do!” They’d been on a wild, rolly polly ride and the temperature and humidity had been all over the place, but they were eventually safely plugged into power. 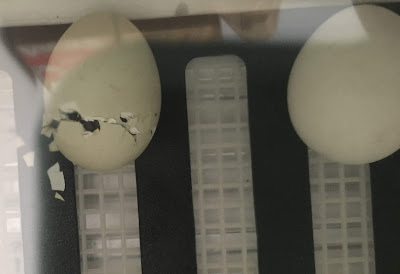 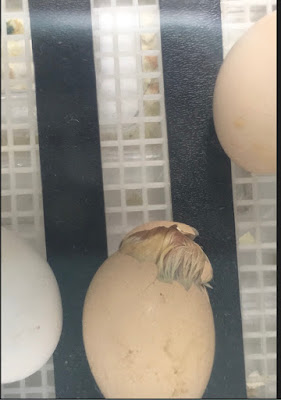 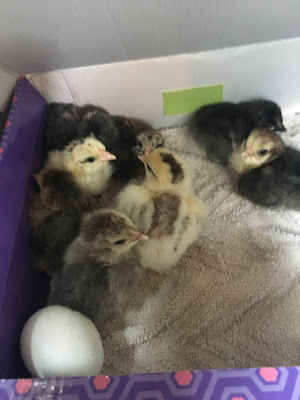 Three days later, we still were without power. I had decided we were going to do school work despite the minor inconvenience. I am sure there was one thing only on Amelia’s mind - incubating eggs. I looked at my phone and noticed a new text. “Chicks!” We jumped in the car and raced down the road. Indeed there were chicks! As we stood in awe, one hatched before our eyes, and another. We had to get back to work, so I promised a trip back after lunch. Six chicks were waiting on us by the afternoon, and by the next day, ten out of fifteen of Amelia’s eggs had hatched!

It is much easier waiting for JP’s babies to arrive in January with little chicks to care for. Amelia is ready to load her incubator again in a few days and she absolutely loves caring for her chicks. The last one to hatch is far braver and sturdier than the rest. The kids wanted to name one of the chicks after the hurricane, but Michael seems not much like a hurricane name. They thought and thought - Leahcim.