April 18, 2018
Cows have always been a possibility. George comes from a long line of cows. His father has cows. His uncles have cows, his grandfather had cows.  He’s rolled it around in conversation and considered the length and breath and depth of our land as even being capable of housing and feeding a small herd.

George stood admiring the tall, lush, green rye growing in our pastures and seemed a bit disgruntled that the pigs were choosing to dig into it and eat the bugs beneath it instead of munch on the tasty, juicy green all around them.

“Cows,” he said, “would eat this grass.” Not twenty four hours later he proposed, "can you go pick up two baby calves at a dairy about an hour away?"

I’ve often bucked and participated reluctantly in some of the comings and goings of livestock at our place, but this time, I asked a few questions, loaded up the kids and a dog crate and headed west to Marianna to collect two baby cows. I couldn’t fathom that they would fit in a dog crate, but George promised me that the cows were quite small and it would work.

With George, nothing is impossible. He believes that with all of his heart. Off we went with an address and some instructions on what to say and do. 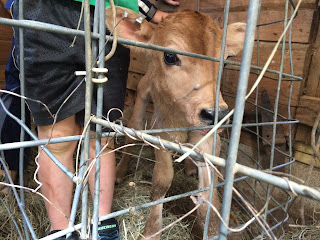 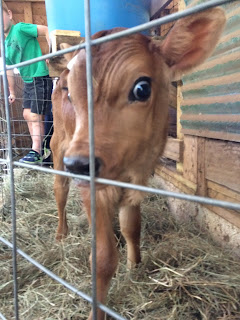 We arrived at the farm. Flat land dotted with thousands of cows. Black, gray, white, and red. The land stretched past what we could see. The flat open sea of space spilled over the edge of the horizon. We drove far down a dirt road and found a few hands working the cows in the dairy. It was simple and sweet. A small family dairy. I met barefoot six year old Emma and asked where her daddy might be. She pointed towards the barn. And there, off to the side, was a small caged trailer with three small calves bundled together in a tight pile. Yes, two of those would fit in our dog kennel. George knows these things. 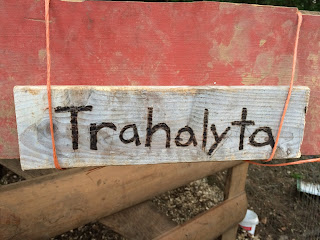 Doug pulled leather gloves from his hands as he walked towards us and welcomed us with a solid handshake. After introductions, he pointed to the cows. Those are the three. Three? No. Only two. No, three. I explained that we were only taking two and he explained that we were actually taking three. I tried to explain that there was no way I could take three because of space and he tried to explain that I could definitely put all three in the kennel. It would be twice as much money, so he would have to take a check, not cash. He agreed. I asked George. He said, you can say only two, that is okay. I couldn’t. How could I leave one behind? How could I break the cuddle pile?

He handled the cattle like a baker spinning pizza dough. It’s impossible and they make it look a easy as pie.
And just like that, we were on the road with three calves between 24-48 hours old. 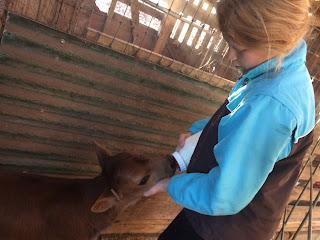 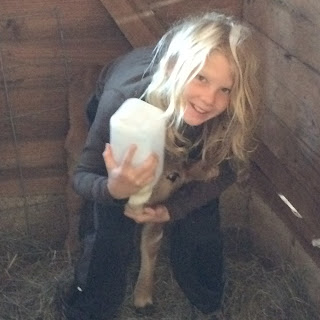 One for Amelia, one for George Wilder, and one for William. Names rolled around as we drove home. Trahalyta for the lady, Bandit and Mustafa for the boys. We watched our load carefully.

George was waiting for us when we got home. He’d been working on their stalls and hay and feed. Immediately our world changed. We were now responsible for keeping these three cows alive. They needed colostrum and electrolytes and formula after that. They needed to take bottles and we had to know how to do it. I watched several youtube videos on feeding baby cows because I had no idea what we were doing. George is a pro. He knew what to do. 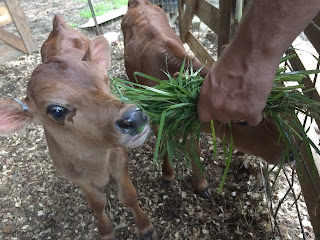 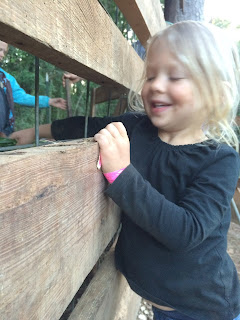 For a week, we fed them morning, noon, and night. Now just twice a day, Amelia and George Wilder prepare warm milk in a FIVE gallon bucket, fix bottles, feed the cows, clean the stalls, pet and play and tediously wash out the bottles and set them out to dry until the next time. They haven’t complained one time. The cows are no longer fragile and vulnerable. They have doubled their size and bottle feeding is almost over. With clear toddling personalities, the lick and nudge and jump and nuzzle and watch and play and moo and experiment chewing on pieces of grass we offer them.

It is a possibility for us to raise cows. And there is lush green rye ready and waiting. 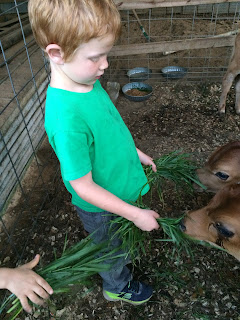 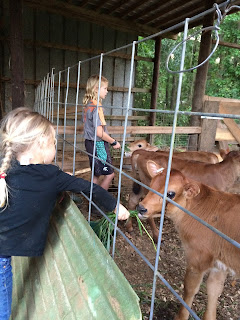 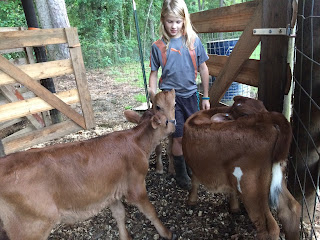