January 18, 2018
It is NOT a hop skip and a jump to Colorado Springs from Arches National Park. And there isn’t much in the in between. We tried to stop for dinner at a lovely park on the Snake River, but the mosquitos showed no mercy and the heat beat down. The best move was to move, so we did. Eventually, exhaustion won and we started looking for places to camp hours short of the Springs. If you want to camp at a camp ground in Colorado in July, book it now, because every single one will be full when the warm weather arrives.

I phoned a long time friend from my childhood that now lives in Gypsum and asked her for some advice. She led us to a camp ground with one site available. We grabbed it immediately, set up camp, and the sun beat down and the mosquitos were right behind it. We decided to find a place to eat dinner. Our cooler was empty as was our morale. We looked like people that had been on the road for nearly 48 hours, but that didn’t stop us from waltzing into the restaurant and mowing down plates of delicious Mexican fare.

While we ate, a random rain shower snuck behind us into our camp ground and left a nice neat layer of damp on every thing. It was late. The closest laundry mat was 30 minutes away. I loaded up our wet bedding and just started driving. This wasn’t exactly the glamorous glorious camping experience I had signed up for. George, however, signed up for everything the day he was born. He signed up for awesome and he signed up for blizzards and heat and drought and rain and flat tires and broken down cars and music shows and planting gardens and fixing everything and doing anything. So, while I drove in a quiet van towards hope, he stayed with the children and made awesome out of nothing. He is just that good. 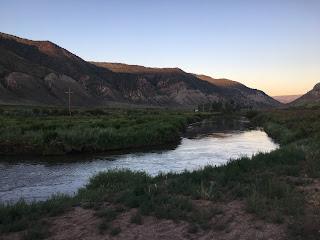 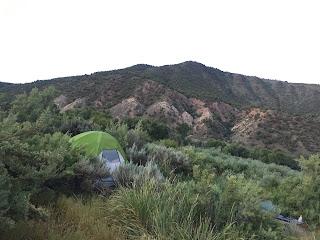 After pouring my mothers heart out to the lady behind the counter at the laundry mat, she finally agreed to let me just dry the bedding in her driers. And of course I didn’t have quarters, so she gave those to me as well. I could tell she didn’t really want to be nice, but she was sure not going to let darling children from Florida sleep in wet sleeping bags. While my clothes dried, I cleaned out the van. It was past due. And while I cleaned, I came up with piles of quarters! I was so excited to repay her. I’m pretty sure she let out a sigh of relief when I brought her my clutch of quarters.

Finally, we were sleeping soundly on dry bedding. And the night was glorious. Fully rested, I woke up before the crew, slipped into running shoes, and headed down a paved path following the Eagle River as it cut between high hills on either side. The rising sun silently cast colors man cannot repeat into the water and up the mountain side.

Now, we were dirty, but rested and ready to find the Borders at their camping site outside the Springs. 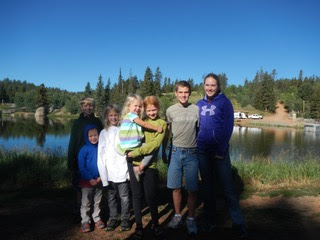 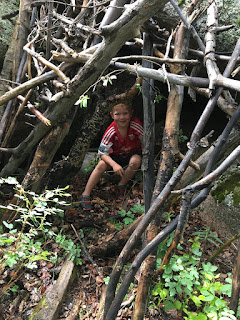 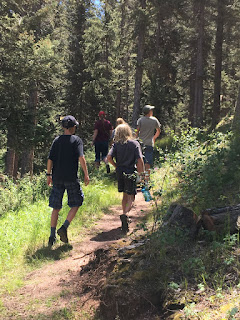 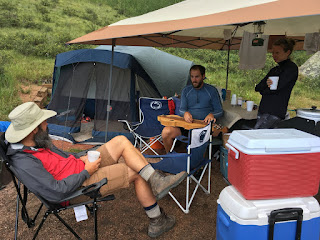 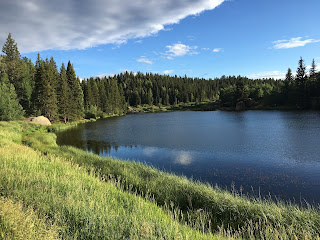 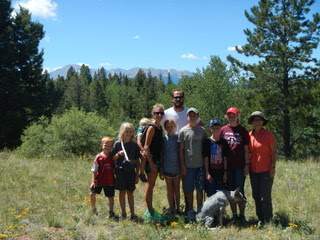 We drove up and up and up. We drove past the presidential mountains, we passed valleys, we drove over high ridges back down and back up. And finally we found the Borders waiting on us in a cool summer rain. We dug to the bottom of our bags for all the warm clothes we had packed and layered them on. The children immediately began constructing forts in the woods and we got to sit and chat with Martha and Jim for hours while sipping on warm hot chocolate. We were not in a van. We were not in the heat. We were in a glorious place with family and it felt just right. 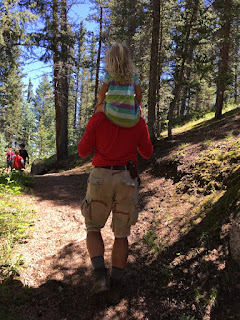 After food and music and stories and plays and forts and ducks and sleep, we went back to Martha and Jim’s house to finally shower and pack for the final push home.

It was after dinner. Our plan was to drive into Kansas and camp there. We lasted longer than we thought. With the time change, we were still wide awake at 9 p.m., so we drove on and on. Finally, it was time to find a camp ground. We located a state park near the interstate, and started to drive down down down steep roads towards a lake bed. We could not see anything. It was darker than the inside of a cow. We were quite unsure of our choice, but didn’t really have any other choice but to set up the camp and sleep.

Morning arrived. George was up before the rest of us. As we woke from our slumber, he was hyper with description of this place. It was absolutely glorious. We had camped right in the middle of Kansas, on a beautiful lake with high soft rock walls stoically guarding the water. We made breakfast, and went to explore a bit. All of us ended up swimming in the lake. It was cool and refreshing and quiet.

Giddy with our find, we loaded up one last time to plow through Missouri and keep aiming East and South.

All day we drove and drove through Missouri. That is all Missouri offered us — a good interstate. We decided to stop in Georgia instead of push on to Florida. What a treat to visit with George’s cousin John and his family in Chattanooga. It helped us ease back into humidity. We stopped in at George’s parents to do laundry. Now our trip was complete. We had started this journey at my parents cabin in Spartanburg, SC and were finishing by telling our tales to George’s parents in Georgia. The six hour trip home felt like a hop skip and a jump and it felt like an eternity.
And there was our house. Our beds. Our chickens. Our pigs. Our kitchen. Our washing machine. Our showers. They were waiting just as we had left them.

It was Epic. It was an adventure. And you know what — we will do it again.