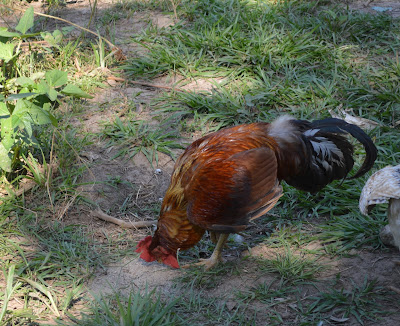 We’ve got a one legged rooster. Well, he’s got two, but one doesn’t work at all so he holds it tight to his chest and proudly hops around straight up in the air and back down again.


Pistol was king of the castle. He took care of all his ladies. He didn’t leave any of the hens out from his daily routine.  Even if they wanted to be left out, he made sure to meet with them daily. He was brave and generous. He often would find bugs or frogs or little snakes and straight away deliver them to one of his beauties. He took care of them and made sure they stayed safe. There were even a few other roosters in his pack, but he let them hang around and probably taught them a thing or two.

One morning, dear Amelia noticed something was wrong with one of his legs. It appeared he had either cut it on something, or perhaps a pig had stepped on him during a valiant attempt to protect one of his dear hens. The wound was a gash more than a cut. Amelia tended to him and took him to our special cage for hurt or dying chicken 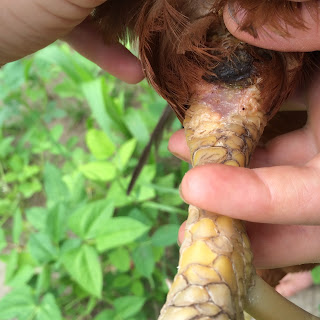 His wound festered. He even started to stink like a dead animal. I thought that perhaps it was time for some chicken soup, but Amelia believed that he was going to make it, and he holds a special place in Amelia's heart, so he had some time.

Eventually, we let him out of his cage for the day, and then he was perfectly free to roam, but he stayed in the front pastures and didn’t head back to the coop with the others. Not yet.

One day, Amelia checked out his wound. There wasn’t a wound. It had healed. But it would cost him the use of his leg. He would have to hop. And does he hop.

As he regained his strength, he decided to try and return to his ladies and the roosters he had so kindly given a place in the family. He had survived protecting his flock and now their king was returning!  He hopped all the way back towards the barn. His ladies were enjoying their bug snacks, but apparently one of the roosters was ready and waiting for Pistols return. Quiche-o, the new rooster in charge, not only chased Pistol far far away from the hens but he beat him to a pulp. Poor bloody Pistol knew his reign was over. The young roosters had taken over and he was not welcome back. Pistol returned to the front pasture. 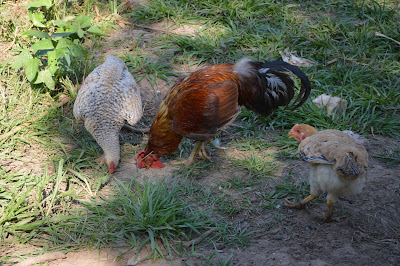 Pistol took it like a man and he quickly healed from the wounds the new king rooster inflicted upon him. He is alive and healthy and one footed. He sleeps nose to nose with the pigs and keeps our new flock of chickens company. And, he still has a mighty crow announcing the very very first idea of dawn.

I can’t imagine how he feels. He knows his tribe is there; yet he can’t be with them. However,  he seems happy with his new family of pigs and pullets.

This is Pistol’s story. 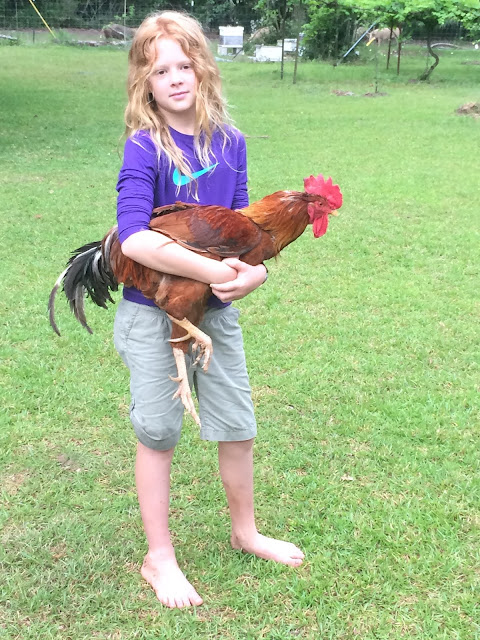