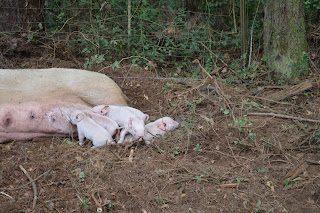 --> We’ve been raising pigs for three years now. I love them. They are such kind creatures – if you keep them fed. They mind their own business, like to visit with us and then return to their wallow or grazing or food or whatever it is they want to do. They are smart. They play games with each other and with sticks and other treasures they might find in the yard. 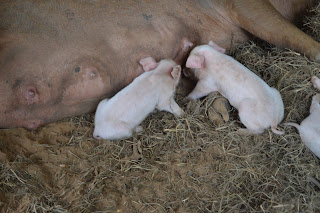 In May, we decided to step up our pig life and had our two ladies bred. We watched their bellies swell and took daily reports from Amelia and George Wilder about the condition of their possible labor and delivery. We set their due date for September 11. That day was long. No piglets. On September 14, Amelia came running. Cyprus is having her pigs! She had already had four and delivered two more.


They really are adorable creatures. Sweet, fuzzy, pink, rambunctious critters – always crawling around and over and on top of each other. 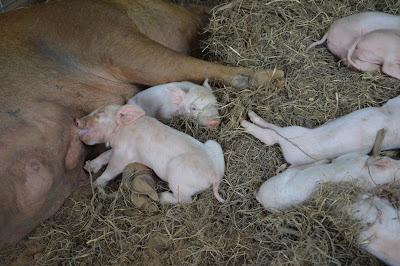 Our dear Bronte still didn’t have her babies and we were still waiting. She was collecting anything that looked nestable and made a nest. This was to be her first litter and she just didn’t know what to expect. I didn’t really know either.

George had a music event on lovely Saturday evening. I kissed him goodbye and went to check on Bronte. There in the hay was tiny piglet number one. We sat and watched and waited and prayed and encouraged our sweet Bronte as she labored and waited too. At one point, her first baby was trying to find a nipple. Bronte was trying to get into a good laboring position. I was encouraging her and understanding perfectly well that this was tough. She opened her mouth, I'm sure in pain, and at that moment, the little pig - still blind -- walked right into her mouth. They both gave a start and rearranged and kept working on their goal. Nursing and laboring. They both did great. She gave birth to 10 piglets. Eight made it.

Total, we have 13 baby pigs. That is a lot of pigs. They are cute right now.They watch over each other and squeal and fuss and wrestle for snacks from their mama. They find places to scratch their backs just like their mother. They fall and trip and run and scuttle. They grunt and squeal and are curious.