Why Moms Don't Make Candles With Their Children 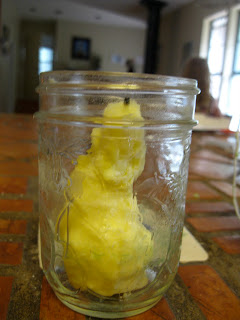 Amelia dreams big. She thinks that projects should make up the ebb and flow of the day. She makes lists of her plans. I can't keep up.

Candles were on the list. Finally, we had the supplies gathered, a day at home, and a sleeping William. This was crucial.

We started with my memory of a day long ago as a half pint at a festival celebrating antiquity with hot wax, a string and some dipping procedures that I'm sure were scientific, but this seemed fairly easy to replicate 25 years later.

Wax was ready. Strings were ready. The memory wasn't working. Thanks to google, we were able to begin again. 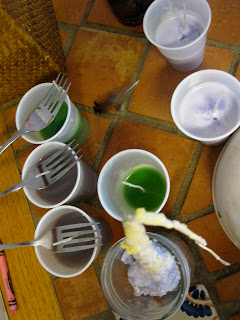 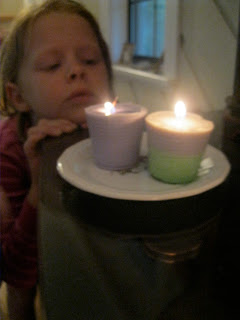 George Wilder got the hang of it immediately. He was settled on his stool having a blast. Colored crayons turned the wax lovely shades of yellow, green, and purple. He giggled as a funny pear shaped candle formed on his string. Dip in wax, dip in water. Dip in wax, dip in water. Lots of wax on stove on all pots on stool on floor. Amelia's wasn't working. She was sad. We made some candles in plastic cups, but this just wasn't the same as dipping, but it did create the same lovely dripping across all surfaces.

We took a break. We went outside. Amelia went back inside. She resurfaced a bit later grinning from ear to ear. She had returned to her stool and tried again and succeeded. She had a massive pear shaped candle hanging from her string.

We lit the candles to read our bedtime story. Their faces told the story of the day. 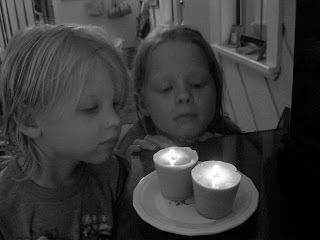 My first thought is that was nice and let's check it off the list, but we have bees wax coming. . .