January 31, 2012
Today was priceless. It didn't begin that way. A bit tired and grumpy, the children fumbled through a cereal breakfast. George didn't even get through his bowl while dealing with behaviors before 8 a.m.. The regular clean up and animal feeding followed. I was preparing to strap on the second cup of coffee to make it through the morning when a dear friend called and wanted to know if Amelia could play.
For most mother's this sounds like a dream, but I have two peas in a pod. My dear Amelia and sweet George Wilder don't do much without each other. I thought we would give it a shot. Amelia left and George Wilder wept. His heart broke in two. He sat on my lap and cried big crocodile tears and his heart heaved with the ache of separation. Oh how I understand his pain. Once again, I had an older sister that I adored and it broke me to watch her grow wings and fly just one step ahead.
Five minutes later, we were building a train set and reading books. Then we navigated our cars through the town carpet and stopped for tea at the castle. We built a castle with bricks and special glue and George Wilder made me dinner with sheep, cheddar cheese and peanuts still in the shell. I'm glad the tea was the only thing that wasn't imaginary! William played nearby propped on a pillow eating his hand. 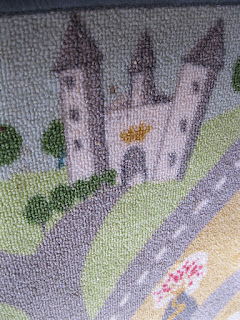 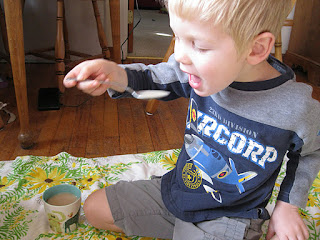 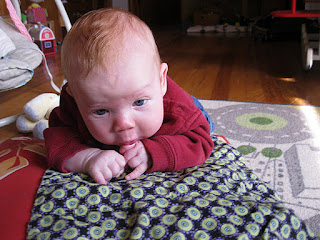 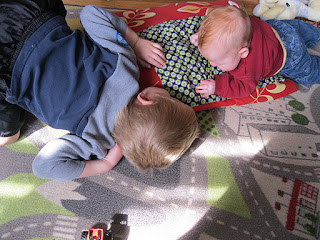 How sweetly the children played after Amelia returned. They played with such peace. It was as if the absence reset their kindness and selfless buttons. They put together some puppet shows and danced and played. We played into dinner time, which once again didn't happen. George was not available to create dinner, so as I left for Papa Johns, George and the kids were having a pine cone fight. I guess that is what you do when it is nearly 70 degrees the last day of January! 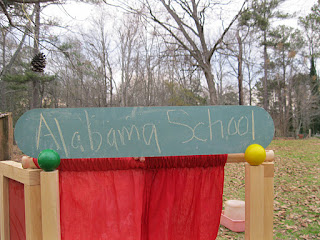 This picture just makes me laugh. "Alabama School" was the name of the puppet show that George Wilder performed after "Prax Hidden". I have no idea what that means! 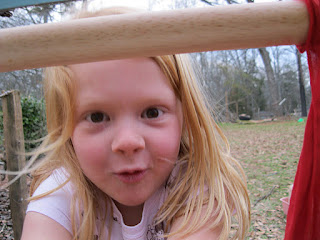 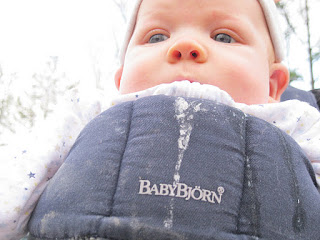 That is not snow, that is spit up! Yuck. 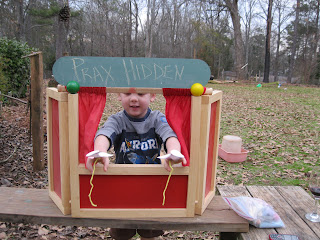 George no longer has a minute to spare for any new kitchen creations or songs. Every minute is filled with preparing his work and doing his work. He is up late and up early piecing together four years of study. It is beautiful to watch him stop and think and think some more and try to figure out how to say a lot in just a few words. He has concepts upon concepts that are brilliant. They reach far into the depths of education. It is cutting edge. It is edgy, but it is real and bright and refreshing. I am so proud of him!